Walking along the Indus, just outside of Leh, one does get rewarded with some nice images. The back-roads between Sindhu Ghat and the Shey Palace takes one through (erstwhile) marshes and irrigation canals and this is a lovey stretch for birding, especially for some common species around Leh.

As I was walking along, I spotted this male Common Rosefinch, also known as the Scarlet Rosefinch in some parts of the world – one look at him and it becomes clear as to why. In his breeding plumage, he is a delightfully coloured bird. While I have clicked pictures of him earlier, I haven’t been lucky to get the combination of one in its breeding plumage, good light and a nice background in a frame before.

He was busy looking for food and was perched on top of this plant, which I reckon is some sort of thistle (maybe a globe thistle) and plucking the dried-up spindles hoping to get at something. I clicked a few shots, edged ahead a few steps and was repeating this sequence hoping to, eventually, fill the frame with this action. 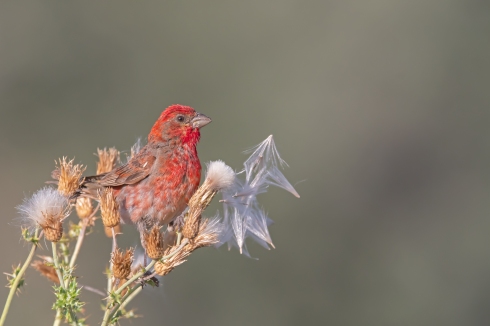 The spindles, hanging mid-air, makes for quite an interesting frame, don’t you think?