The Painted Lady is one of the most widespread species of butterflies in the world, found on nearly all continents and climates. They were recently in the news in Europe, more specifically in UK and Ireland, which is seeing a decadal mass emergence of these lovely butterflies this year. They are seeing a wave of home-grown butterflies, which are the descendants of those carried on winds from sub-Saharan Africa, along with newer arrivals from continental Europe.

The migration pattern of the Painted Lady is considered a good example of an Irruptive Migration; migration that is not seasonally or geographically predictable with some evidence linking their migrations to the El Niño climate pattern. In Central America, it seems that migration is sometimes related to overpopulation. In contrast to regular migrants, these irruptive migrants have neither a fixed breeding ground nor wintering ground and few individual return to the same areas in successive years. They are basically vagabonds. 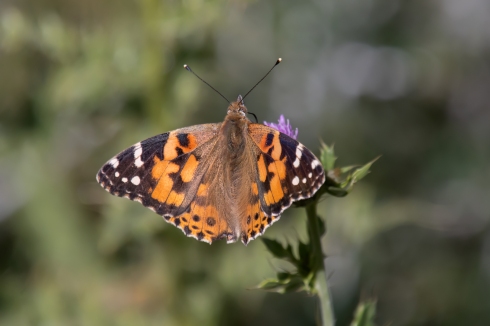 The most intriguing aspect of the migration of species like the Painted Lady is this : The Painted Lady completes its life-cycle in 5-6 weeks. Which means that it can take up to six generations for them to make their annual migration – leaving Africa in April to head north and returning once cooler weather settles at this latitude. This construct is so mind-boggling that it took me quite a while to process and I have so many unanswered question around this still ratting around in my head. The loudest of them is how would the next generation know that they are in the middle of a migration?