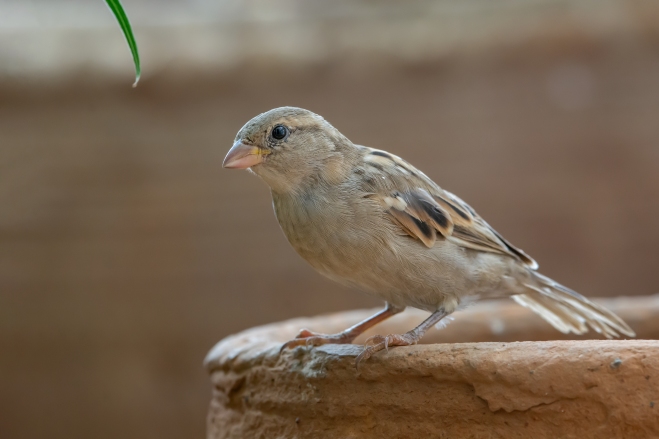 I was looking through some of my earlier images, I have about 4TB of photos that I seem to have accumulated over the last 6 years, and stumbled upon a few of the humble House Sparrow. These were shot in the balcony of our apartment – and we are bang in the middle of the urban messy sprawl that we call Gurgaon (or Gurugram these days). 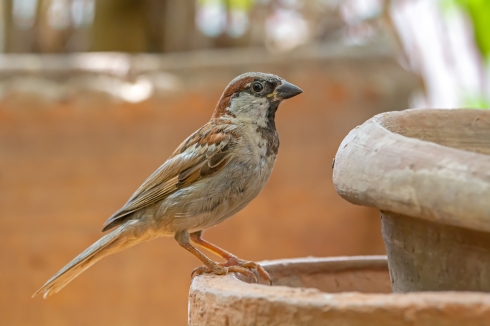 The House Sparrow, despite its suggestive species name, passer domesticus, hasn’t really been domesticated like the dogs and the cats. They are usually found wherever humans are and have really adapted, over the years, to living alongside humans. I was reading an interesting research that found that the process of natural selection may have favoured genetic changes that altered their skull shape and allowed them to digest starch – changes to both these genes might have helped them eat human cultivated foods.

Over the last 9-10 years now, we have always had House Sparrows in our balcony and I have heard several visitors surprised to hear their noisy, but melodious, chattering any time of the day. Having some green in the balcony definitely helps.

What has probably drawn them, however, is that we have been incentivising them with a constant supply of grains. Starting with rice and then eventually moving to bajra over the last few years. Through several experiments, the girls at home cracked the design which ensures that it is only the sparrows that can reach the grains and not the pesky pigeons.

While we are sitting at the table in our living room and working we don’t really need any music playing, the constant chattering of the flocks of sparrows that visit us through the day provides us with a sense of calm and make us feel that all is well with the world.

I can remember just a few occasions over the last decade that we have had silence in our balcony, silence defined as missing visitors over a period of at least a few hours. The first one was during a mild earthquake that we felt here. There was a period of eerie silence that preceded the actual tremors – it was as if the sparrows could sense the impending tectonic movements – and for a few hours after. The second was when a raptor, a Shikra in this case, decided to pay us a visit and had perched on the railings for some time – the sparrows decided to give our balcony a wide berth for the rest of the day. And the third was when a pigeon decided to give up the ghost on our balcony. 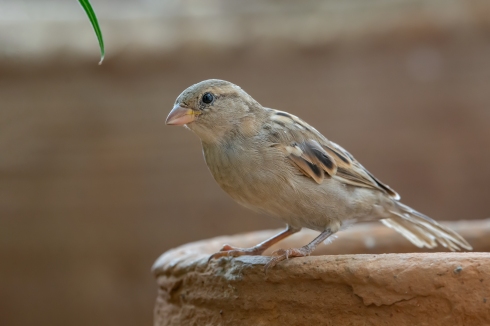 This image of the female house sparrow is possibly one of the first ones I shot with my 600mm FL lens as I was testing it out, having taken delivery of the bazooka. If you are looking at it on a large screen and zoom into the eye of the girl, you can distinctly make out a reflection of our balcony door-frame in her eyes.

2 thoughts on “Our daily houseguests”