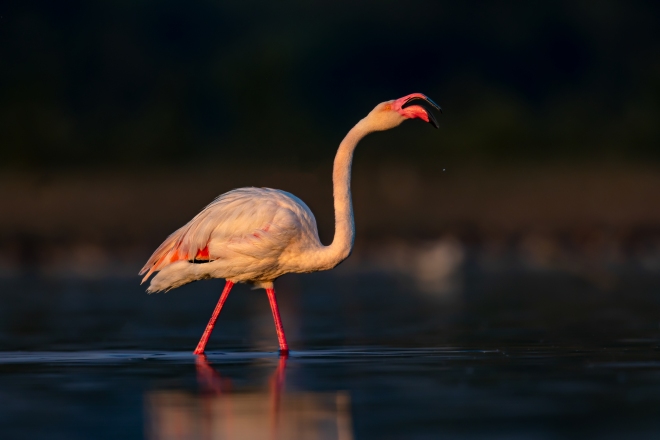 The word ‘flamingo’ comes from the Latin word ‘flamenco’ which means fire, and refers to the bright colour of the birds’ feathers. But flamingos aren’t born with this colour in their plumage. Baby flamingos are actually grey or white and they turn pink over the first couple of years of their lives.

The pink and reddish colors of a flamingo’s feathers come from the pigments found in algae and invertebrates that make up their diet. Their diet of brine shrimp and blue-green algae is rich in alpha and beta carotenoid pigments such as beta-carotene and canthaxanthin.  As the young flamingos consume this diet, the pigments are retained and they start imparting the striking pinks that one sees in these tall birds. If flamingos didn’t feed on brine shrimp, their blushing plumage would eventually fade. In captivity, the birds’ diets are supplemented with carotenoids such as beta-carotene and and canthaxanthin.

Flamingos, thus, embody the saying “you are what you eat.”