The International Union for Conservation of Nature classifies species on a scale ranging from LC (Least Concern), NT (Near Threatened), VU (Vulnerable), EN (Endangered), Critically Endangered (Cr), Extinct in the Wild (EW) and finally Extinct. It is a globally accepted and used convention.

Critically Endangered (Cr) is the highest risk category assigned by the IUCN for wild species. A Critically Endangered classification means that the species numbers have decreased, or will decrease by 80% within three generations. It is therefore considered to be facing an extremely high risk of extinction in the wild.

There are, I think, 15 Cr birds in India and one of them is the Sociable Lapwing, usually a winter visitor to the Western fringes of the country. This lapwing has seen a very rapid population decline for poorly understood reasons. As I read somewhere, the decline took place between 1960 and 1987, when its population halved. Its population (in 2006) was estimated to be between 600 to 1800 mature individuals; some 20–25% of the 1930s population levels.

While I couldn’t come across more recent population data for the bird I have read that its population is being revised to the upward end of that scale, possibly more, following the discovery of their previously unknown main wintering grounds in Syria, where 1500 birds of all ages were encountered in 2007. Also, in October 2007, a superflock of approximately 3,200 sociable lapwings were discovered in Turkey. The current IUCN classification is CR A3bc— meaning that the population is expected to decline in the next decade or so by 80%, but based on theoretical considerations and the known habitat destruction rather than direct observation of the birds.

The Sociable Lapwing is one of these birds that has been on my list for a while, from the first time I made a trip to LRK more than 4 years ago. So, naturally, when we heard that there was a flock spotted around Nal Sarovar, it was worth making a quick dash to check it out.

After we had spent close to a couple of hours crawling and getting some great close-ups, I decided to try and count the size of the flock. They were in the ground about 30-35 feet ahead of me and I could count about 67 – but there were probably some that I missed. A Marsh Harrier then made a low pass over the flock and they all took off. The shot below was made as they were flying away and the frame has the entire flock covered. 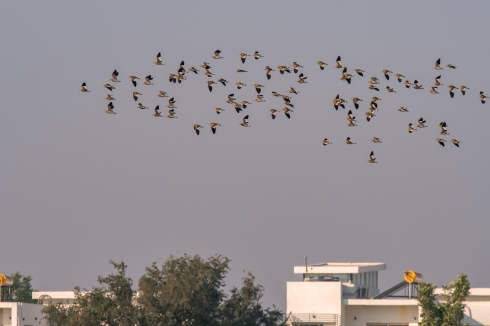 I can count 87 Critically Endangered Sociable Lapwings in the frame, with the roof-tops of the nearly houses in the bottom of the frame. A nice juxtaposition that seemed to strike a chord in my mind.