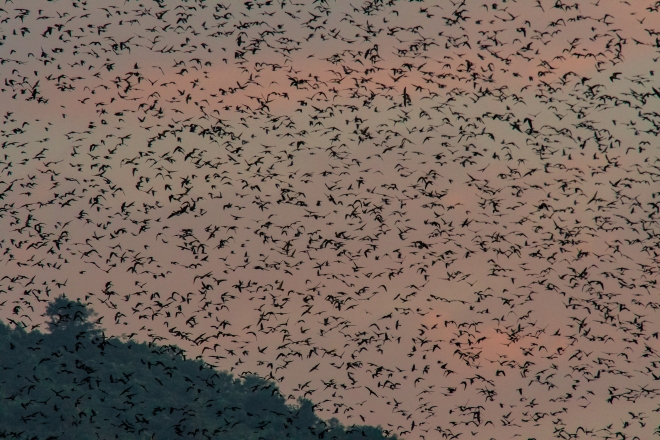 Did you know that the collective noun for a group of falcons is ‘a bazaar’? Neither did I but a google search throws this up (apart from cast which I knew is a collective for falcons & kestrels). 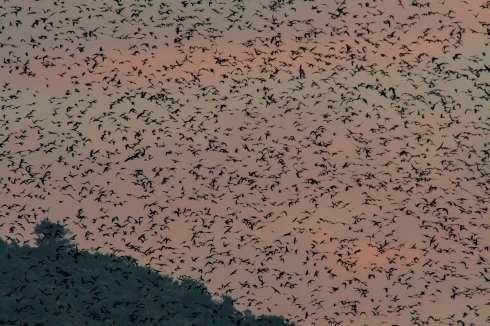 This image is from a trip to Nagaland last month and this sighting of the Amur Falcons is certainly one of the highlights – not photographically speaking but as an experience. This was part of a flock that took off just as we climbed the watchtower at Pangti in Nagaland. There are 3266 birds in this frame, I actually sat and counted this as I was curious about the size of the flock. It was an overwhelmingly awesome sight, seeing so many falcons up in the air. Going by the numbers in this frame, I reckon that there would have been about 15-20K falcons in transit in Pangti.

Nagaland is a transit point for the Amur Falcons on their annual migration from Eastern China to Southern Africa and it is here that they rest and fatten up for their long journey over the southern peninsula and the Arabian Sea. Once past the peninsula, they do one of the longest overwater passages of any raptor. over the Indian Ocean, a flight of over 4000km in 3-4 days which includes nocturnal flight. Their entire annual migration path covers a distance upwards of 22,000 kms. Thats a lot of flying.

The Amur Falcon is wholly insectivorous – catching them mid-flight. With probably about 15-20K of these birds stopping by in November, I guess one needn’t worry about mosquitos when the bazaar is in town;-)

Curious thing though – the entire bazaar would take off periodically (about every 25-30 mins) while we were there. I haven’t been able to figure out why.

5 thoughts on “A bazaar of falcons”