Once in a while, I reckon, that it’s OK to post an image filled with flaws. I can list a lot of these for this image – had to shoot at a very high ISO (it was early morning, the wren babblers are notorious under-growth skulkers so I am not sure if I can call that a flaw or it was the only choice I had) which meant a slightly grainy image (which I have attempted to correct marginally while processing), despite bumping up the ISO all I managed was a shutter speed less than 1/80th which wasn’t good enough to get a really sharp image (nothing really I could have done to fix that apart from bumping up the ISO even further), I had to shoot wide open at f/6.7 (using a f/4 lens and a 1.7 TC) to get every fractional increase in shutter-speed which meant that I sacrificed on some sharpness but maybe gained on shallowness of the depth of field, just couldn’t avoid the broken twig that was cutting across the bar-wing, the tail was obscured by the branches / leaves and I can go on to list a couple more. But I reckon that you get the picture.

On the flip-side, I do like the branch on which the Bar-winged Wren Babbler is perched (despite its feet being not too visible) and I think that I managed to get the composition right. For a skulker and a very fidgety fellow like this bird, I guess getting a couple of these right, gives me the license to show off the image.

The image below is a sharper image but has many more distracting elements, has a nice habitat feel to it though. 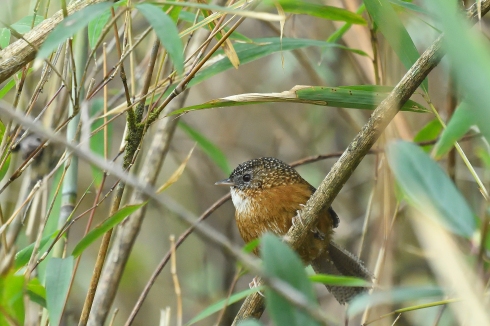