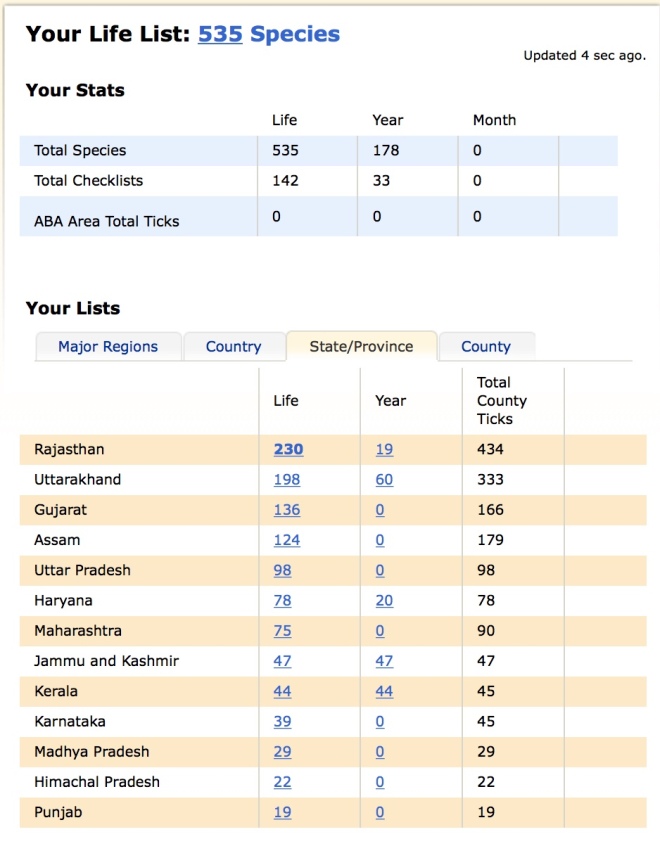 Let us start with golf, for no other reason than this probably turning out to be one of my best golfing years. I played a lot of golf during the year – managing 95 full rounds on top of 45 9-hole rounds for a total of 140 days out on the golf course. I also did play some good golf as evidenced by the haul of 155 birdies and a solitary eagle – when I managed 100 of these the last year, I thought that it might be a tough milestone to beat. I surprised myself by crossing that mark early in September. My average score on these full-rounds was 80.5, which is about 1.34 strokes better than my average last year. On the 9-hole rounds I seem to have averaged 41.6 – looks like I play the full round about 1.7 strokes better than the half-round. I carried about 274-yds using the Driver (about 12 yards longer than the previous year) and 227-yds using the 3-hybrid, a new addition to my bag somewhere around the middle of the year. That club seems to have served me well – with better accuracy and distance than my old 3-wood (adding about 5-yards to the distance). I had a best round of 74 (twice) and had a score in the 70’s a very creditable 33 times, nearly every 3rd round that I played – that is definitely a nice statistic to keep in mind going forward.

It seemed to me that this was a year I cancelled more birding tours than I took – that was before I actually counted it for this post. I managed to visit Bharatpur (Jan), Thattekkad (Mar), Chopta (Apr) and Leh (Jul) but had to cancel Sikkim (March), Tal Chhapar (Oct) and Nagaland (Nov). Crossing the 500-lifer mark on the Chopta trip was a good milestone to leave behind during the year. I added 67 lifers during the year with 178 birds spotted over the 4 trips – definitely not my most productive year, but one that had some memorable sightings esp. in the high altitude desert plateaus of Ladakh.

It was also a year of lots of travel. I took 94 flights, flew around 174k kms (more than 4 times around the earth), spending 265 hours on flights (that’s 11+ days!!). Add to that about 424 Uber and Meru rides and that quickly becomes more than a month spent on travel. That also meant 176 days out of home – of which 32 were for personal reasons and 144 were on work. Hmmm, I seem to have spent more time on work travel this year that the year before.

As the year winds down and I am just teeing off for my last round of the year, I can’t help but wonder which of these I would be able to sustain into 2018.