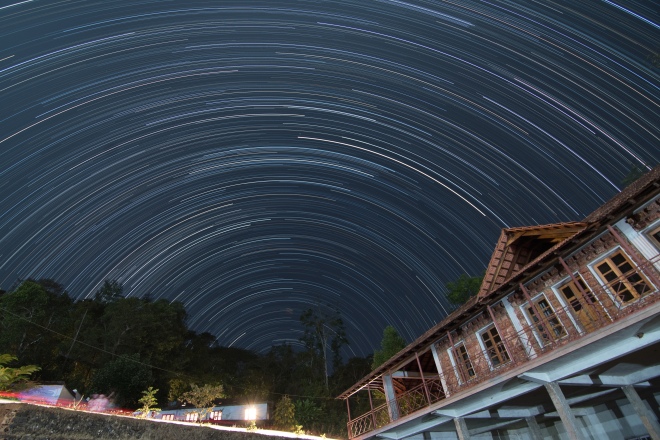 For us city-dwellers, the opportunity to see a clear night-sky presents itself only when we are travelling to places which have a low human footprint. These Astro-photography opportunities (that cover star-trails, Milky Way, etc) don’t present themselves too often and whenever they have, I have tried to use the chance and make something of it. Until recently I have had a few, mostly unsuccessful attempts at capturing a star-trail. Let me try and recollect what I have learnt from these experiments.

To start with, there are a few prerequisites for attempting a star-trail (some or all of them are applicable for a milky-way image): (a) a clear sky with no potential cloud cover for a few hours (b) a new moon night or if there is a moon, one that is well outside the area of the sky one intends to capture (c) no (or little) light pollution. I have tripped up several times in these prereqs often.

These are things that you will need – (a) battery grip which gives the additional battery needed (b) padding for the lens if it is too cold to prevent lens from fogging (never faced this issue so far though) (c) a good, sturdy tripod (d) wired shutter release (I haven’t used one in a while since Nikon added the multiple exposure functionality into their cameras).

Focussing – You have to remember that when you set the camera on a multiple-exposure mode, the camera will try and obtain a focus on each exposure. The work-around is to get the lens to acquire a focus at infinity (point at any bright star and half-press the shutter) and then deactivate the AF mode. Once this is done, one has to be careful not to move the focus ring on the lens.

Composing – While the movement of the stars is the subject, I have found that having something interesting in the foreground usually enhances the image. This could be a tree, a building or anything interesting. And ideally something that is immobile – I have made the mistake of picking a shrub / bush as a foreground and the movement of the leaves against the wind ruined 4 hours of effort.

I would recommend a test-shot to see how that foreground looks under the long-exposure that you will be shooting at (once you have the exposure set up). One quick way of checking this would be to bump up the ISO about 2-3 stops which would result in an equivalent stop reduction in shutter speed – so you will not need to wait as long to check if the you have the composition that you wanted.

You will also need any good app that can help you locate the stars and their movement over the next few hours. I use SkyView and find that very handy. And lastly you will need to decide which part of the movement you want to capture. Pointing at the Polaris can help you capture the circles around the North Star while other parts of the sky can capture part of the swirls. One of the things to keep in mind while composing is to ensure that the moon, if it is in the sky, doesn’t move into the frame at any point during the period of exposure.

Exposing – depending on what you have read, there are a few different approaches here. The one I am most comfortable with is the one I will try and walk you through here. I normally work with the M (Manual) mode so that one can control all the 3 variable values (Shutter speed, ISO and Aperture). Since the light falling on the sensor from the image is going to be very weak, dialling in an aperture values that is wide open (or 1-stop away) makes perfect sense. I usually work with shutter speeds of 30-seconds – that is usually the slowest that one can work with on most cameras before the “bulb” mode. Keeping these two fixed and composing the image in your viewfinder, you then adjust the ISO till the exposure meter is balanced. This should usually happen at the lowest possible values, I would ideally work with ISO values of 400 or lower as I have found that at higher values the images tend to have noise that ruin the image.

Now that you have the composition, focus and exposure all set, it is now a simple matter of setting up the multiple-exposure feature in the camera. On the Nikon D500, it is quite simple & intuitive to set up. You define the no of exposures that you need, the gap between the exposure (try and keep this to a max of 2-3 sec) and a start time (either Now or to a predetermined time) and let the program take over.

I usually prefer capturing the images in the RAW format as I can fine-tune the white-balance in post-processing. Once all the images are captured, you would transfer all of them to a computer, use a RAW editor (I prefer Lightroom), pick one of the first few pics to edit / adjust, apply that to the rest of the stack and convert to a jpeg format. I then render them using StarStaX, which is fairly easy to use and intuitive.

There you go, it’s all quite simple actually. Maybe you should try this sometime.