I consider myself a fairly decent golfer. I have been a single-handicapper for several years now and do occasionally manage a sparkling round of golf – which I classify as one where I have less than three poor shots. But I have had very limited success in tournaments.

I can think of several reasons for this. Firstly, over the years, I have become accustomed to a very fast pace of play. Data suggests that my best golf rounds happen when I play at a pace of 3-and-a-half hours or under. Which is quite impossible in a shot-gun start tournament of 90+players – usually the rounds stretch well into the 5th hour and the pace is painfully slow. Secondly, despite having a handicap in single-digits, till this year, my standard deviation of my scores used to be high. So, I would have a couple of good rounds and follow that up with a rotten one. For some reason, this year has been much better. Probably because I have been playing more frequently. Or the addition of a magic club in my bag – I added the 3-hybrid during the middle of the year and that has become quite the go-to club for me off the tee. Thirdly, one is used to seeing a lot of players in tournaments play off handicaps that give them a big margin for error. Why someone would have a certified handicap that may not be reflective of their actual skill beats me.

Given that background, I am sure that you would understand why I approach these tournaments with zero expectations. That’s exactly the mindset I had when I signed up for these two event in the first 2 weekends of November. This is despite coming of a very hot run of sub-80 scores in the last couple of months.

The first of these was the monthly medal on the first Saturday of November. I started well, teeing off from #1, striking the ball very well and putting myself in positions to make birdies on #2 (putt stopping just a few inches short), #3 (an even closer miss from 6 feet), #4 (a long 27-feet put just lipping out), #5 (a 12-footer that lipped out) before sinking a 6-foot birdie put on #6. I continued creating more birdie chances, missing a 12-footer on #7 and an even closer 6-footer on #8, before 2-putting got a birdie on the par-5 9th hole. That meant a great card of 1-under-par for the front-9. The only way I could have lost from there was if I managed to really mess up my back-9. The double-bogey on the 13th was ominous and things could have gone downhill, but I managed to hold my game for the next few holes and card a 75. When I holed out my last putt, I knew that I was in with a good chance. 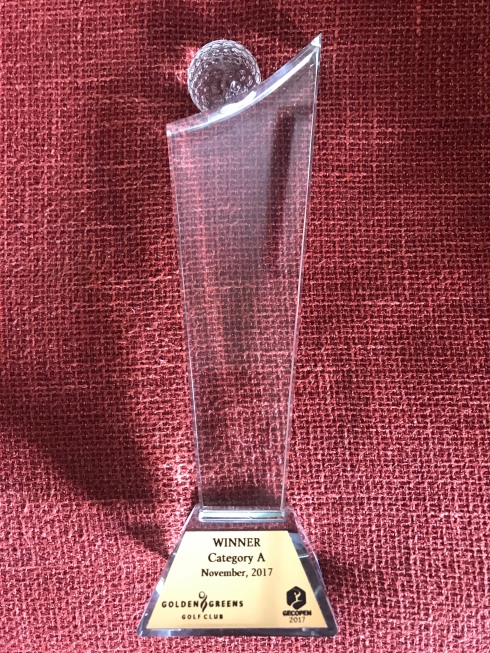 The next one that I participated in was the next weekend. This time I was starting off from #12 and didn’t start off too well, missing the first 4 greens-in-regulation and picking up 3-bogeys. It all turned around with back-to-back birdies – a long (27 feet) putt on #17 and a slightly longer one (30 feet) on #18. I lost that advantage when I somehow contrived to manufacture a double-bogey on #1 from the center of the fairway – how did I even manage that!! Some steady golf on the next 10 holes with 7-pars, 2-birdies and a lone bogey meant that I closed with a 74 on the card. One better than the previous week. And it was good enough to win again. It was good to also pick up the longest drive trophy as well. 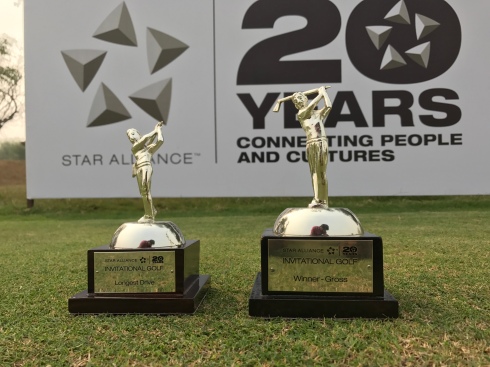 Just hope that I have not used up all my luck for the next few years and I will be able to win a few more.