When my wife’s sister (Aruna) and her daughter (Ira) had planned a visit to India for their summer break, we were looking around for a wildlife trip as a part of their visit.  Ira had wanted to go to a forest in India and, if possible, see a tiger. June is usually a nice time for some sightings across the tiger sanctuaries in the country, but we narrowed down our choice to Ranthambore given the proximity to Delhi, a short train journey and having heard from a lot of folks about The Ranthambore Bagh. They were extremely helpful with all the logistics and the safari bookings and all we had to do was to land up there.

We were just about 30 minutes into our first safari and in this rocky area in zone 3 when we spotted Bijli / Lightning sitting under the shade of a big rock. Our guide, Nadeem Abbas, had headed straight for this area as there were reports of her being spotted here a few hours back. 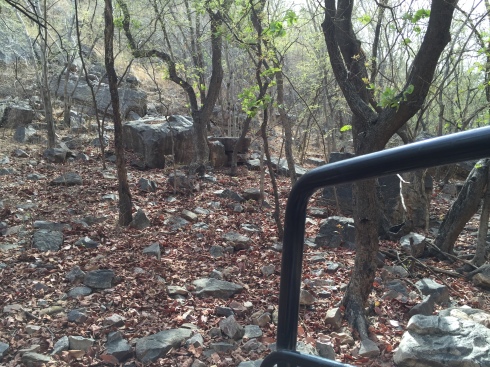 We were the first ones to get here and she seemed to be in no hurry to go anywhere – both of which gave us a lot of time to position ourselves well and use the opportunity to get this right. I quite liked this picture that Krti managed while we were there.  She was using the Tamron 150-600 on a Nikon D7200, and managed to zoom in just enough to take a branch on the right of the frame out of the equation. She shot this at f/8 to get some depth of field on the image to get the subject reasonably sharp. And framed it well when Bilji was looking in her direction.

After about 30 mins under the shade, Bijli decided that she needed a change of scene, stood up, stretched herself and walked away. This bit of action was #shotoniphone6.

Our guide had a good idea of where she was heading to and that’s where we went. We were one of the last to reach that area and we saw quite a traffic jam ahead of us. We saw Bijli crouched on  one side of the road, looking very intently beyond the vehicles at a Sambhar deer that was grazing on the other side – the vehicles had formed a barrier of sorts between Bijli and the sambhar.

The sambhar was oblivious to the tiger on the opposite side, and she was using the vehicles as a shield to crawl closer towards the intended prey. Eventually she did crawl close enough to try and go for it. But the sambhar was agile enough to escape. All this while she was out of the reach of our camera’s and we had to be satisfied with capturing this action ‪#‎shotoniphone6‬

With a failed attempt behind her, she decided to cool off for a while in the small pool before walking off away from us and along the road for a good 10 mins – about 12 vehicles in tow – before disappearing into the forest for the rest of the day.

A day later, 15 mins into our 3rd safari, again in Zone 3, we spotted ‪#‎Arrowhead‬ just coming out of a watering hole. We barely had time to position the vehicle (and for me to switch from the 600mm to the 70-200mm lens). I was keen on getting a full frontal shot – in the hope that she would shake off the water and give me an interesting shot. And she did oblige with that bit of action. Didn’t really have enough time to compose the frame well enough, but you can make out the water spray from her body as she shakes it off. 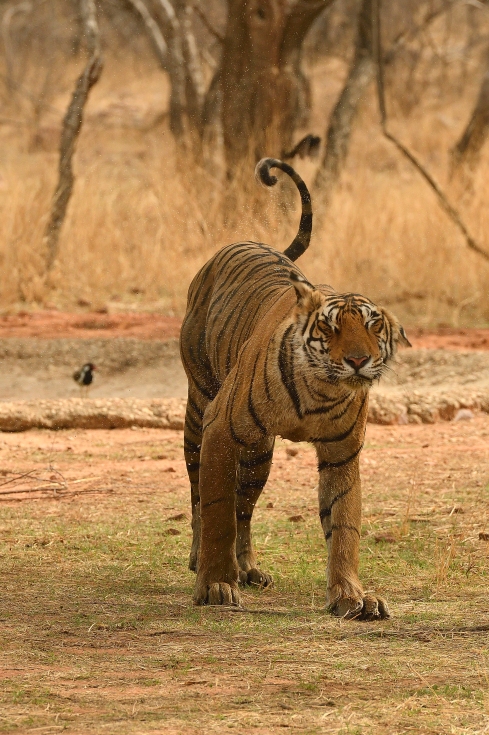 She then started walking towards the shadow of this tree and decided that she would take a nap. She would occasionally open her eyes and survey the surroundings and go back to her siesta which gave us ample time to try out all possible compositions. A couple of these, with the 600mm, are ones I personally like. You can see that she has chosen a nice area in the shade of the trunk and one where there was just about a small clearing through the grass in the foreground where i could see her.

Getting a good eye-contact makes for a riveting photograph despite all the distractions that could be posed by other elements in the picture. Happy that I decided to go vertical on this one, something that doesn’t come naturally when one is using a camera. Capturing a tiger at close quarters using a 600mm lens is an interesting learning experience, IMHO, makes one push their thought process on perspective and composition.

Till now, I have never been much of a tiger-person and have been able to stay above all the hype around this wonderful  creature. After this lovely trip to Ranthambore last week, I reckon that I might have to start reconsidering this.